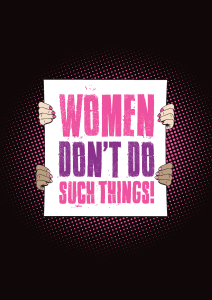 Step back in time and walk in the footsteps of Suffolk women past and present who have broken down barriers in their communities, careers and countries throughout history.

‘Women Don’t Do Such Things!’ is the new free exhibition at The Hold in Ipswich, telling the stories of pioneering Suffolk women, and opens on Friday 4 February 2022.

From activists to doctors, archaeologists to pilots, visitors to the exhibition will be able to experience these and many more moving and poignant stories of women who have challenged expectations and led change.

Cllr Andrew Reid, Cabinet Member for Heritage at Suffolk County Council, said: “The ‘Women Don’t Do Such Things!’ exhibition offers a fascinating insight into the lives and experiences of some inspiring women from Suffolk.

“Suffolk Archives have put together a full programme of events to support the exhibition including curator tours and craft workshops, as well as talks from our archivists and local historians. This is a great chance to find out more about local history, and to come and visit The Hold, and bring that history to life.”

A special event will also be held at The Hold to launch a new film by documentary maker Holly Brega about the Women’s Land Army in Suffolk about The Land Girls and Horses of Suffolk.

The exhibition includes contemporary artworks and displays telling women’s stories. A selection of works produced by members of the More than Mum group run by the Future Female Society, reflects the women in the group and their own personal journeys supported by the society.

It will also showcase female leaders in Suffolk’s community today. Franstine Jones was awarded a BEM in the New Year’s Honours list for her work as a volunteer and trustee at the National Black Police Association and for her services to Black, Asian and Minority Ethnic communities in Suffolk.

Emily Shepperson, Exhibition and Interpretation Officer at Suffolk Archives, explained: “The title of the exhibition is taken from a phrase allegedly said by Queen Victoria.

“In 1885 the Criminal Law Amendment Act was passed which included measures to criminalise same sex activity between men, but there was no mention of women. According to legend this is because when the draft legislation was shown to Queen Victoria she refused to sign unless all mention of women was removed, as ‘Women Don’t Do Such Things!’

“Although this exchange is highly unlikely to have ever happened, the phrase lives on as an example of attitudes towards the long lived, rigid expectations of women’s behaviour, characters, and the lives they could live.”

In the lead up to International Women’s Day, an ‘Inspiring Suffolk Women Day’ will be held at The Hold on Saturday 5 March. The event includes a free day of talks, workshops and more led by community and support groups to inspire, motivate and engage.

The Hold is also hosting an International Women’s Day conference on Tuesday 8 March in collaboration with University of Suffolk, Suffolk Chamber of Commerce and the Epicentre, which will bring together women speakers from different spheres to share their knowledge and experience.

The exhibition is supported by The National Lottery Heritage Fund, as part of the activity plan to support the building and opening of The Hold.

Robyn Llewellyn, Director, England, Midlands & East at The National Lottery Heritage Fund says: “We are delighted to support The Hold with this ambitious and important exhibition. It’s thanks to National Lottery players that the people of Ipswich and further afield will be able to celebrate the stories of these inspiring women, past and present.”

‘Women Don’t Do Such Things!’ runs from Friday 4 February to Sunday 19 June at The Hold on Ipswich Waterfront. Admission is free, you can book in advance online at www.ticketsource.co.uk/suffolk-archives/or tickets are available on the door. 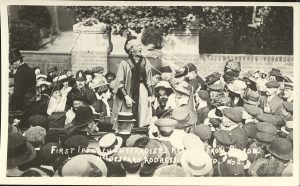 His Royal Highness The Duke of Gloucester officially opened The Hold on Tuesday 14 September.

The Duke was given a tour of the building, which is home to more than nine centuries of history safely preserved by Suffolk Archives.

His Royal Highness was greeted by Suffolk’s Lord Lieutenant, Clare, Countess of Euston, as well as a line-up of civic guests, and was then shown round by Kate Chantry, Strategic Manager of Suffolk Archives.

During the visit, The Duke met Tim Greenacre, Chief Operating Officer at the University of Suffolk, Dr Harvey Osborne, Course Leader for BA (Hons) History and students, and saw the state-of-the-art teaching facilities including a 200-seat auditorium and seminar rooms.

Lord-Lieutenant, Clare, Countess of Euston then gave a short history of the Suffolk Medal, including showing a replica which is on display in the building’s main street.

Representatives from local history groups were introduced to The Duke in the John Blatchly Local Studies Library, named in honour of the esteemed local educator, author and historian.

The Duke was shown treasures from the Suffolk Archives collections spanning 900 years of Suffolk’s history, including the oldest document – a Charter of King Henry I granting churches and property to the monks of Eye Priory from around 1119 – and the newest contemporary collections of Black Lives Matter protest placards.

His Royal Highness also met representatives from organisations that contributed to The Hold, including the National Lottery Heritage Fund which awarded nearly £11million to make the project possible, as well as those involved in the design and construction of the building.

To complete the visit to The Hold, His Royal Highness unveiled a plaque to declare the building officially open and signed a book which will be added to the archive as a record of the visit. 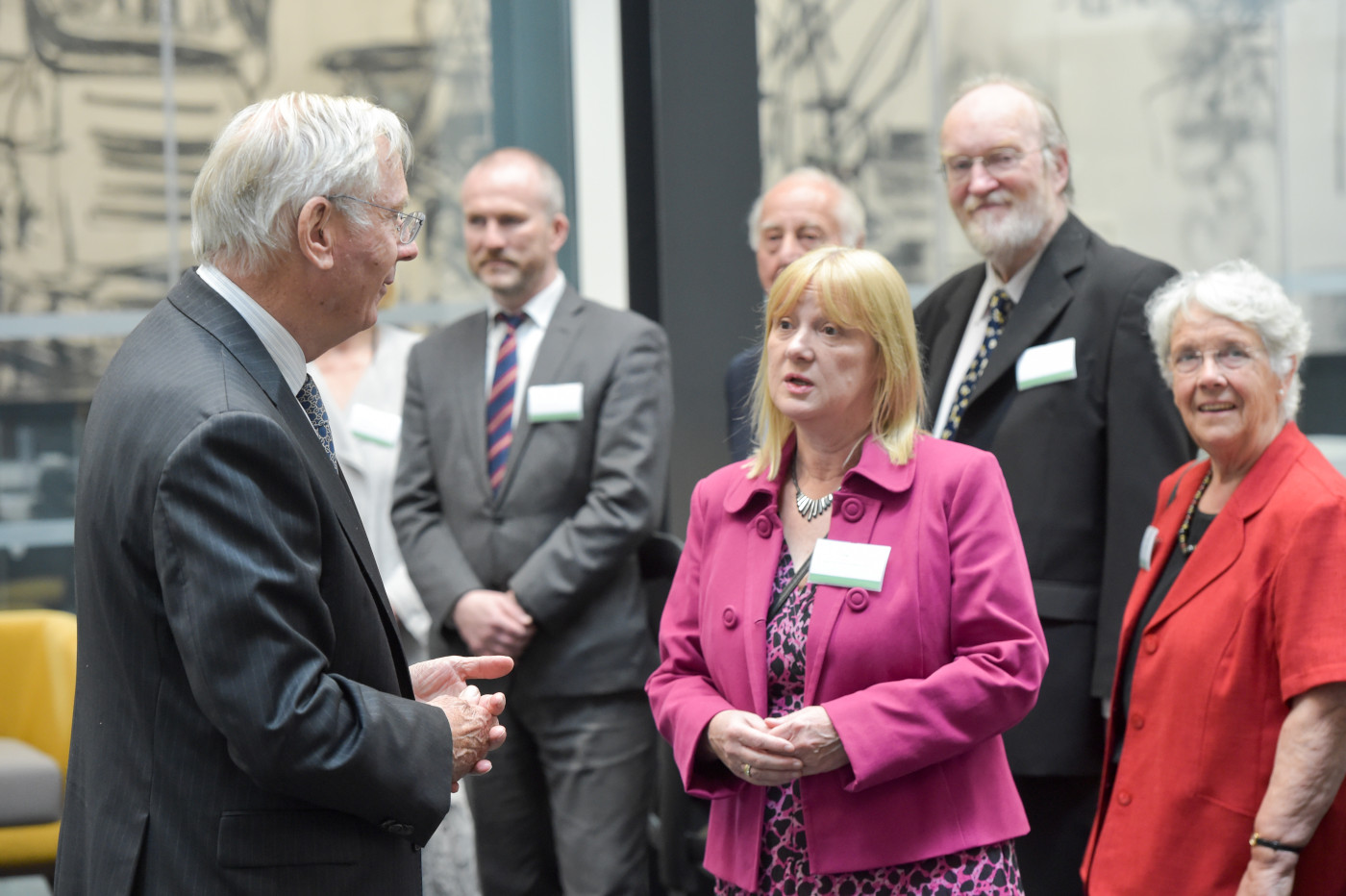 We are delighted that The Hold has just opened to members of the public with its inaugural exhibition – Global Events: Suffolk Stories. This exhibition explores how the Suffolk community has responded to different international events throughout history. Focusing on the arrival of American service people during the ‘Friendly Invasion’ of WW2, the rising tensions and public messaging of the Cold War period, and the collective community response to COVID-19 during 2020. The exhibition runs from 2 October 2020 to 10 January 2021. Booking is essential. Find out more information here: Global Events: Suffolk Stories 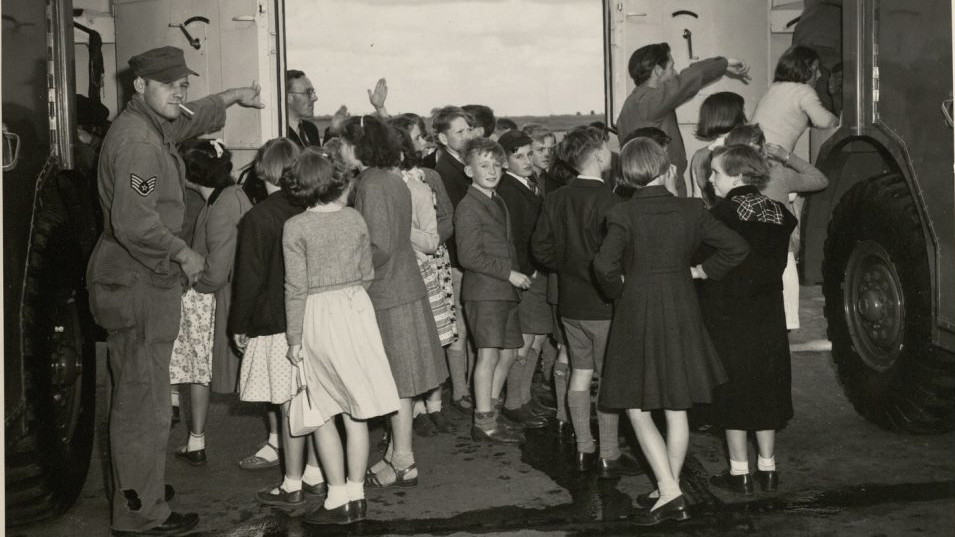 Owing to the COVID-19 pandemic, all branches of Suffolk Archives are currently closed. More information can be found on their website: https://www.suffolkarchives.co.uk/suffolk-archives-coronavirus-update/

In terms of the impact on The Hold, excellent progress with the construction work had been made before the lockdown occurred, but unfortunately work had to completely stop at the end of March. Work should be starting again week commencing April 27th, using appropriate guidelines and social distancing measures. Suffolk Archives currently expect the building to reach completion over the Summer, but this is subject to change as there may yet be further developments or restrictions introduced by the government.

As well as construction work being delayed, the lockdown has delayed the preparations to move staff, equipment, furniture and collections into the building. It is not possible to estimate exactly when this work may resume again, but Suffolk Archives hopes staff will be able to access and use the building alongside the University at the beginning of the new academic year in September, depending on the COVID-19 situation. It is still very hard to set timeframes for public access, as this will be dependent on government guidance regarding the relaxing of the lockdown, gatherings of larger groups of people, and social distancing recommendations. Suffolk Archives will post updated information to their website as it becomes available, so be sure to visit www.suffolkarchives.co.uk 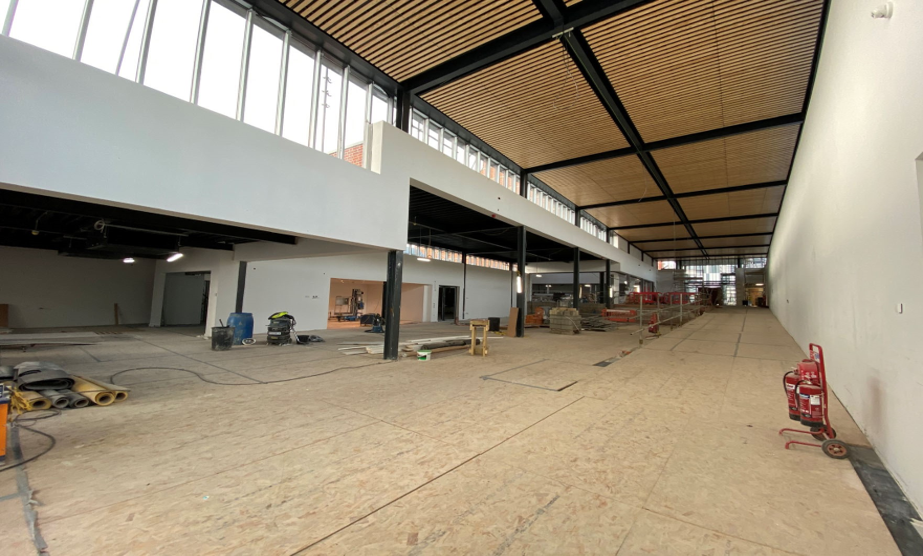 In these unprecedented times, Suffolk Archives is seeking volunteers to help them capture a record of life in Suffolk during lockdown. Whether that’s keeping a diary, spotting fake news, scrapbooking, or recording your social distancing experiences, they want to preserve your contributions to create a permanent collection of this important period in history. Visit their website to find out how to sign up and contribute https://www.suffolkarchives.co.uk/life-in-lockdown/recording/ 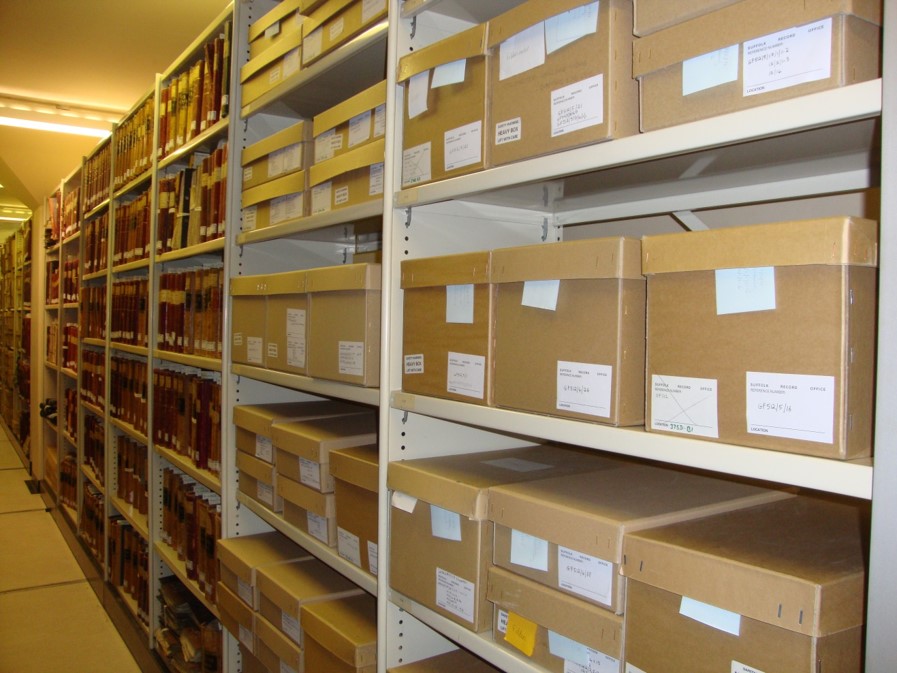 Work on The Hold is now mainly focussed on the inside of the building, which is really coming together. We had a sneak preview of the site recently and the look and feel of the building is more and more apparent. 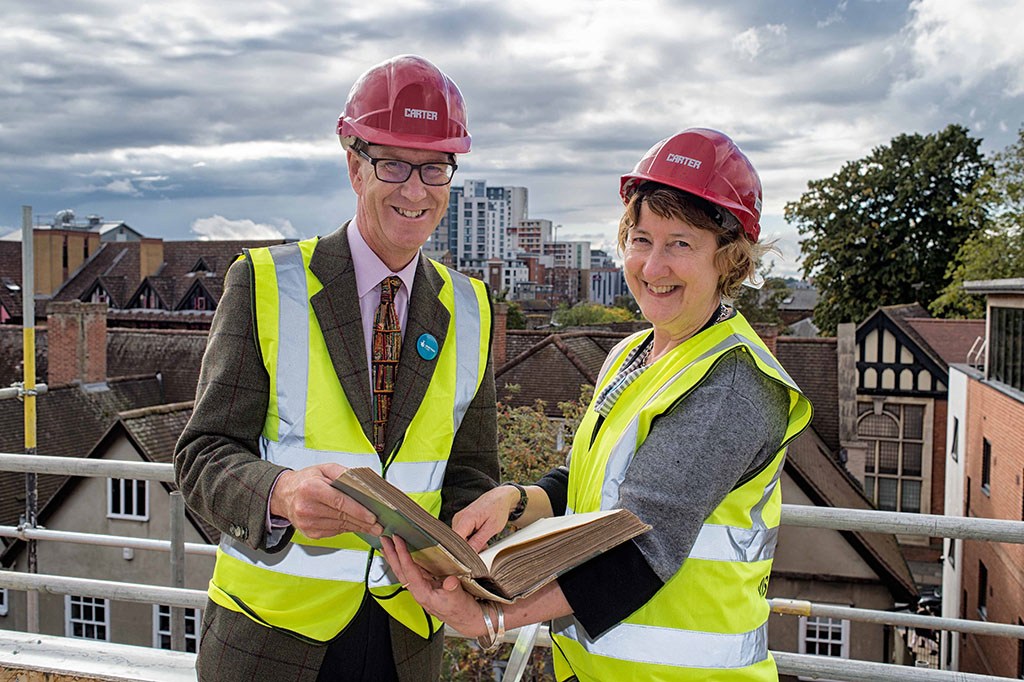 To mark the topping out of The Hold Suffolk Archives Foundation is today launching its ‘Make your Mark’ campaign to encourage public support for the project and through this give Suffolk’s colourful past an exciting future.

Funds raised will go towards meeting remaining construction costs at The Hold and the fitting-out of the interior of the building to the high standards that visitors from all walks of life deserve.

“The Make your Mark campaign provides an opportunity for people across the county to get involved in The Hold right from the outset. We really hope anyone with an interest in local history will want to add their names to a specially crafted donors’ book, which will be kept and displayed at The Hold. “This book has been hand made by local company Owl Bookbinding and it will itself become part of Suffolk’s historical archives,” comments Peter Gray, Chair of the Suffolk Archives Foundation.

Those wishing to support the Make your Mark campaign can do so by:

The East Anglian Daily Times published an article with photos and a video of The Hold. A chance to see the inside of the rapidly developing building. The article can be viewed on line. 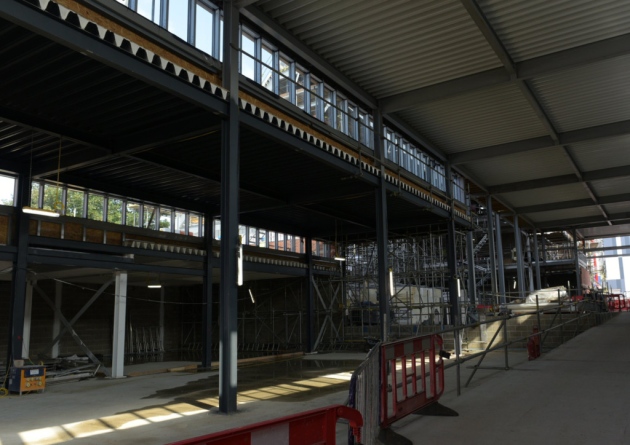 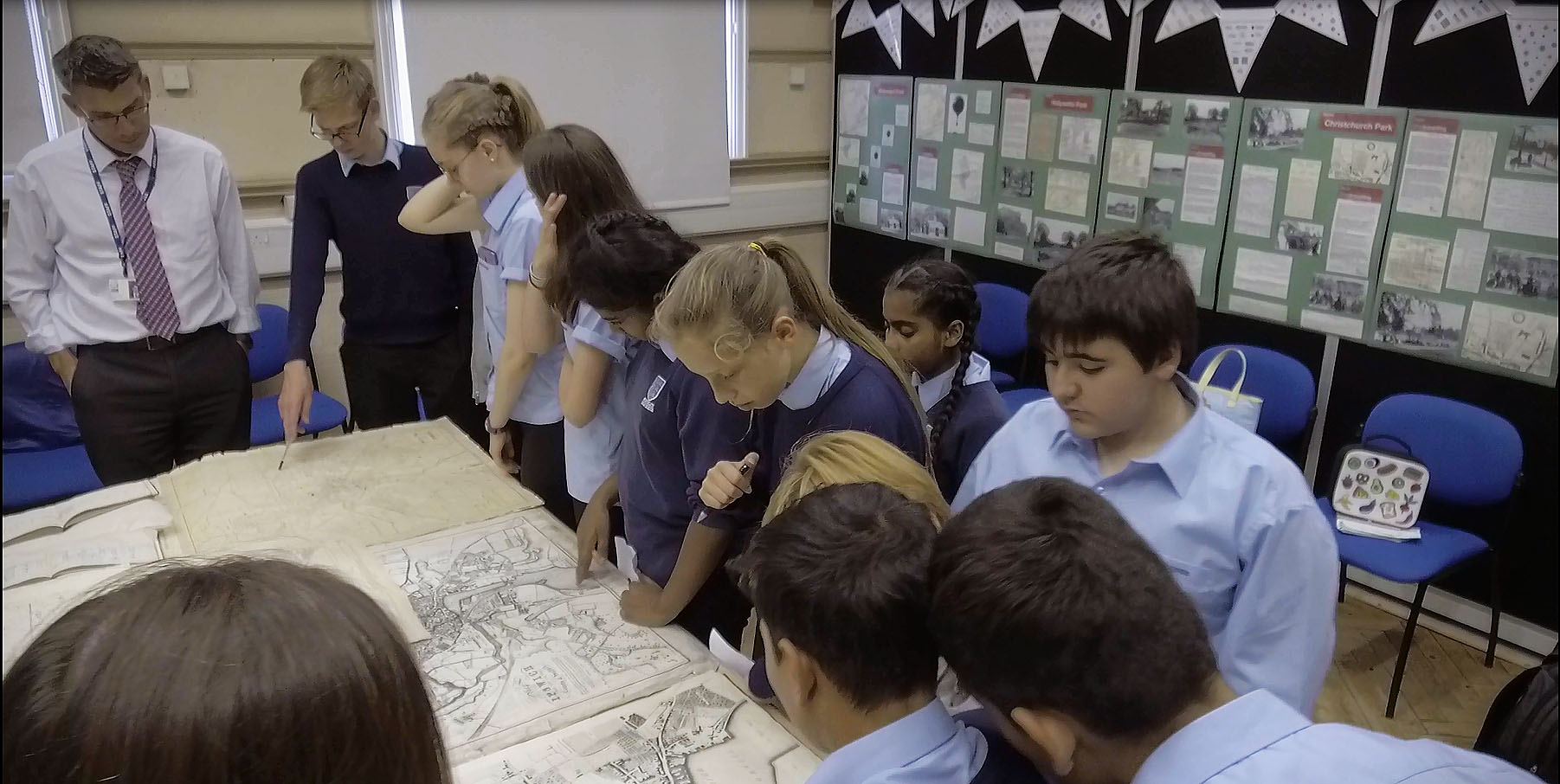 On 27th June, the Chair of the Suffolk Archives Foundation joined the Record Office’s Community and Learning Officers (Mandy and Hannah) to talk to KS3 History Teachers about the immense opportunities The Hold and Suffolk Record Office has to offer students in supporting their learning.

Over the coming months, Mandy and Hannah will be developing teaching resources, visit plans and experiences for teachers and students; we hope teachers will continue to support this work with valued input, review and assessment and participate in what is to become our countywide Teachers’ Network.

We want to ensure that the schools programme for the whole county supports education and curriculum needs, providing children and young people with relevant and creative cultural experiences on varying levels: visits, digital, physical resources and in their community.

In order to keep teachers aware of developments and initiate the Teachers’ Network, Mandy and Hannah will be launching a termly Teachers’ newsletter in the autumn. The Record Office will also host teachers’ networking events which will allow them to learn about opportunities at The Hold and the Record Office’s other branches, and to meet other liked-minded teachers.

If you are a teacher and would like to get in touch with Mandy or Hannah for more information, please email archives@suffolk.gov.uk.

Suffolk Archives Foundation Trustees David and Jane were very pleased to attend the burial of a time capsule in the curtilage of The Hold recently.

The capsule was one of 9 that were buried on February 28th at various locations around the county, to mark not only the building of The Hold but also the 900th anniversary of the oldest treasure in the Suffolk Archives – the Charter of Henry 1st to the monks of Eye.

The capsule locations were:

Staff from the Record Office worked with a team of Graduates from the Suffolk Graduate Partnership Scheme to engage school pupils and other groups to contribute items, creating a snapshot of Suffolk life in 2019 – to be uncovered again in 2119! Here are a selection of images from each location. More are available on the County Council’s Flickr page here.